Nathan was the Graduate Assistant for Global Studies at the International and Area Studies Library in 2020-2021.
Author Archive | Nathan Sonnenschein

By Nathan Sonnenschein on April 6, 2021 in Uncategorized

The Global Currents blog has migrated to the Webtools platform. This update, which is part of a larger update to CGS’s online presence, makes to blog more seamlessly integrated with our main website. For now, older posts will remain at this domain (publish.illinois.edu/globalcurrents) for archival purposes, but all new posts will be published only on the new site.

We have been posting regularly on the updated blog platform, which has several exciting features that were not possible on the old blog platform. First, readers can post comments under posts, just like with many other online blogs. Please feel free to join the conversation and write comments of your own! Second, readers can now subscribe to the blog; if you subscribe, you will receive an email notification when a new post is published.

Thank you for your continued support of the Center for Global Studies, as well as the Global Studies department of the International and Area Studies Library. We appreciate everyone who has followed the blog for all these years. If you have any questions, please feel to email us at global-studies@illinois.edu.

Web Archiving and the Global Response to COVID-19

By Nathan Sonnenschein on June 2, 2020 in News and Events

Written in collaboration with Steve Witt.

One doesn’t need to look far to see how much the COVID-19 pandemic has impacted the world, halting the mobility of people and goods that we took for granted as critical components of the global economy. This crisis has put a strain on nearly every system of our global society, impacting every sector of civil society. To attempt to preserve some of the initial reactions and concerns brought about the health emergency, the Center for Global Studies and the International and Area Studies Library began archiving websites of civil society organizations around the world as they respond to this crisis. 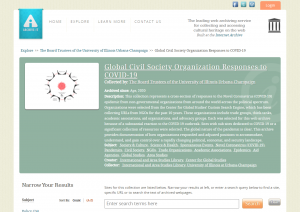 The archive began in late April on Archive-It, a platform that enables us to capture virtual “screenshots” of online websites and documents as they existed at the time of capture. To identify content to capture, we first analyzed a random sampling of 1,000 of the nearly 5,000 organizational websites that are included in the Global Studies custom search engine. The search engine comprises a group of mainly non-governmental organizations that work within different Global Studies domains and range from major think tanks to regional organizations and trade groups, covering topics from human rights to food security to migration to arms control. Of these initial 1,000 sites, we identified 350 organizations that either have a sub-site dedicated to COVID-19 (213) or a significant number of reports and articles available through the site’s search (114). In addition, more than a few organizations had already produced substantial reports on the impact of the crisis. Working with subject specialists in the International and Area Studies Library, we’ve added further sites from East Europe, Eurasia, and Africa, attempting to include representation from organizations in multiple regions and publications in multiple language groups.

This collection of websites, blog posts, Twitter updates, and reports shows how humanity’s concern and intellectual focus shifted in a mere three months towards the threat and effects of COVID-19 and the cascading and overlapping impacts it has on every human and human system. The global nature of the pandemic is clear. This archive provides documentation of how organizations responded and adjusted positions to accommodate, understand, and gain control over a rapidly changing political, economic, and security landscape. In addition, it shows troubling trends beyond the health threat posed by the virus. Themes across continents emerge of new threats to food security, the proliferation of fake news, fears of a loss of privacy, and populist governments using the crisis to consolidate power and implement policies that further alienate and harm vulnerable and marginalized people. Although the archive is still growing and developing as new sites are added and integrated, it is currently searchable at https://archive-it.org/collections/14004. 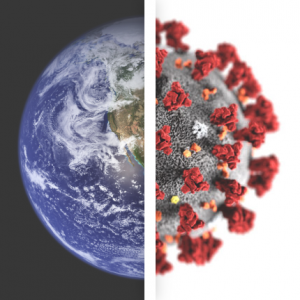 Our archival collection is part of a broader movement by libraries to virtually document the broader impacts of the COVID-19 pandemic. Cornell University Library has developed an archive on the international labor challenges imposed by COVID-19, with webpage captures archiving the responses of unions, employers, governments, and non-profits. The University of Dayton Libraries is collecting webpages documenting the response of the Roman Catholic Church in the United States. The National Library of Medicine has integrated COVID-19 content into its selective Global Health Events web archive, which already included websites captured during the Ebola and Zika virus outbreaks of the last decade. The International Internet Preservation Consortium is amassing a large collection of archived web content that prioritizes the origins of the virus and its spread, regional and local containment efforts, and the wide societal impact felt by the pandemic.

Documentation of the pandemic’s broader effects is complemented by a plethora of projects capturing COVID-19’s impact at the local and individual levels. Public libraries and academic libraries are both at the forefront of these efforts, as Library Journal discussed in an April article. The International Federation of Library Associations and Institutions (IFLA) is also gathering a large collection of case studies that document the ways in which libraries have responded to the virus. Here at the University of Illinois at Urbana-Champaign, the University Archives is collecting personal stories from members of the campus community about their unique personal experiences. On the Archive-It platform, robust efforts to capture websites documenting the impact of COVID-19 at a local level include Dalhousie University Library’s COVID-19 Nova Scotia Web Archive and Kansas City Public Library’s COVID-19 Outbreak web archive.

As we continue to develop our web archive of civil society websites from around the world, we hope to help add a globalized dimension to the current efforts to document the ongoing effects of the COVID-19 pandemic as its impact continues and changes. We hope the archive will be useful to students and researchers seeking to understand this moment in human history and attempting to make sense of how the pandemic impacted different sectors of society and peoples around the world. Because people across the world are dealing with an event of drastic proportions, we feel a responsibility to help capture this pivotal moment in time for future posterity. 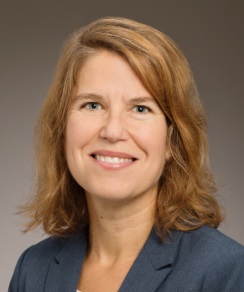 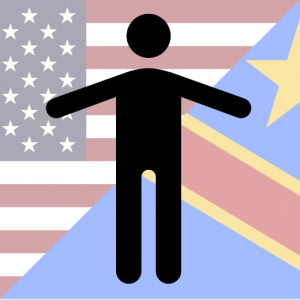 By Nathan Sonnenschein on February 7, 2020 in News and Events

Fair Use/Fair Dealing Week, celebrated by academic and cultural institutions around the world, is scheduled for February 24–28. No matter how you choose to participate, the event provides an opportunity to reflect on the value of fair use laws for virtually everyone in society, even for individuals uninterested in copyright law.

Fair use gives content creators limited control over the use of their creations. In practice, this means work can be critiqued, parodied, or dissected. Books can be quoted. Art and media can build upon existing concepts and works to enrich the culture. Information can be indexed and digitized. New software can read older file formats. Copyright laws can more reasonably adapt to new technology, and individuals can exercise their freedom of speech.

Essentially, fair use is vital for the continued functioning of culture, education, news, and scholarship around the world. Fair use, as it is referred to in the United States, is known as “fair dealing” in Canada. Other countries around the world have also implemented fair use laws. On a global level, fair use means that scholars, scientists, and students can study and share information without fear of penalty or repercussion. At the Center for Global Studies, fair use Is essential to our mission to “promote and support innovative research to better understand global issues confronting the world’s populations and identify ways to cope with and resolve these challenges.”

Want to learn more? Take a look at the Fair Use/Fair Dealing Week website, maintained by the Association of Research Libraries (ARL). For information about the role of fair use in academic work, check the University Library’s Copyright Reference Guide. 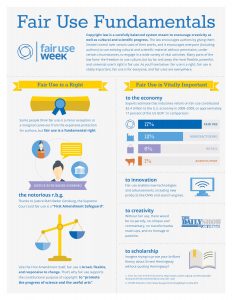 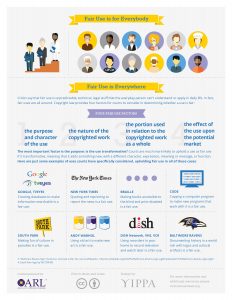 Above images used courtesy of the ARL. Licensed under CC BY 4.0.
Read full story · Comments are closed