“Illegal Rose”, Immigration, and the Importance of Art 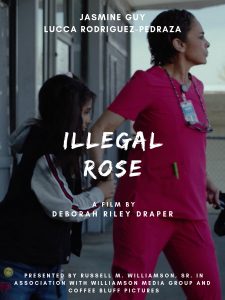 On Friday, December 6th, the iSchool Students of Color hosted their first public event with the showing of a short film titled Illegal Rose and an accompanying panel discussion. Panelists included Deborah Riley Draper, the Director of the film; Aldo Vasquez, from the Chicago Public Library; and Lauren Aronson, Associate Professor and Founder of the Immigration Law Clinic at UIUC.

Illegal Rose follows the story of a young girl named Sylvie who runs away from the ICE Detention Center and is accidentally kidnapped by a retired nurse on the Fourth of July. Set in the backdrop of the present-day politically-charged United States, the creation of the film was inspired by Langston Hughes’ short story “Thank you, ma’am” and looks at how love, respect, and kindness can transcend age, race, and legal status.

The first half of the discussion was productive and dynamic, as each of the three speakers provided varying viewpoints.

Draper began by talking about why she felt the story needed to be told; she talked about wanting to share the idea of being human and being kind, even when you don’t know the other person or their story. She talked about the choice to use the word “Illegal” in the film title, especially as it is tied to Rose, the character who is an American citizen.

Draper and Vasquez then continued together discussing the importance of art, as Draper suggested the role of artists is to use art as a tool to communicate and create safe spaces where anyone can get involved, and Vasquez talked about how public libraries can create a safe space and help the community create dialogue about sensitive and controversial topics.

Aronson provided a more statistics-based commentary, as she shared some of her experiences working with immigrants and refugees. She told the audience 73,000 unaccompanied minors came to the US in 2019, and nearly 50% of immigrants overstaying their visas are Caucasian. Aronson cautioned the audience to be aware and make educated decisions in both their actions and words; in response to one student’s comments, she insisted detention camps be compared to internment camps rather than concentration camps, as they are spaces where populations are controlled, not exterminated. She reminded the audience to be cautious of their statements, and be aware of the consequences hyperbolic language may incite.

While Draper and Vasquez talked about the importance of art as a starting block to build action, Aronson spoke about how art can develop empathy, and how this empathy can be used to understand why immigrants and refugees are coming, what they’re feeling, and what they’re going through. The whole event was an interesting experience, as it housed a great number of opinions and viewpoints, but the overall take away from the event was the idea that art has a place within discourse and can be used as a tool to bring awareness, to educate, and fight injustice.

More information about the film can be found through IMDB here. https://www.imdb.com/title/tt10229526/

To follow current events pertaining to immigration in the U.S., follow the proceedings and publications of organizations such as the National Immigrant Justice Center. https://www.immigrantjustice.org/