Global Fashion: A Window into Globalization

By sbnagle2@illinois.edu on May 19, 2015 in Global Culture, Sociology 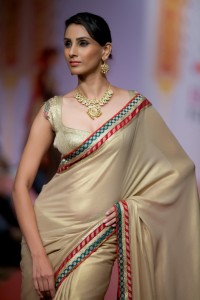 For centuries, textiles and clothing styles have been one of the most obvious and poignant indicators of cross-cultural interchange.  With the rapid rise of globalization over the past several decades, the spread of fashion across global cultures has mirrored the changes in economy, culture, and daily life that globalization has brought. By studying the history and current trends in the fashion business, we not only address a fascinating and exciting field, but we can gain a better understanding of the complicated linkages that connect cultures and people in the modern world.

An example of the tendency for fashion to signify larger global changes is the 1990’s trend of “Orientalism” in Western fashion. Throughout the late 1980’s and 1990’s, fashion borrowed stylistic influences from Asian traditions. Some scholars believe that this trend was a result of the “opening up” of China in the early 1980’s as well as Hong Kong’s separation from Great Britain in 1997. These events not only allowed for the easier diffusion of Chinese cultural traditions throughout the world, but also contributed to an “accelerated a sense of Chinese identity,” as well as a confidence in that identity (Paulicelli and Clark, 2008).

As countries and cultures seek to define their cultural identity within the globalized context of the information age, fashion weeks are being born around the globe. Kazakhstan started their first ever fashion week in 2014, which received much attention from the fashion and lifestyle blogging world (Koopmans, 2014). Iran and Azerbaijan will celebrate their first ever fashion weeks this year. The Mercedes Benz STYLO Asia Fashion Week hosts shows rotated between in countries of China, Korea, Japan, India, Hong Kong, Singapore, Thailand, Indonesia, Philippines, Malaysia, Taiwan, and Vietnam.  These fashion weeks do not only serve to celebrate local fashion designers, they also attract international buyers and journalists that push forward the globalization of the fashion industry.

Despite being touted as a Western tradition, fashion weeks have played a role in reclaiming cultural identity through personal style. For example, this year India celebrates its 25th fashion show season that has spanned over the past 15 years. The unique and often non-western fashions of India are in many ways an anti-colonial statement, and these fashion weeks serve as a way to control their own narrative and representations in regards to fashion (Arora, 2014). Cultural appropriation has become a hot topic issue in the fashion industry, as models and celebrities have come under fire for donning bindis and Native American headdresses. Fashion communicates identity and power, and conflict around the political implications of fashion is nothing new. Marie Antoinette is one of the most well-known historical fashion plates, and scholars continue to study how her fashion influenced (and angered) citizens, reflected political alliances, and became internationally popular during Louis the XVI’s reign (Oatman-Stanford, 2015). Exploring the fashion trends of past and current cultures gives unique insight into globalization and the understandings held about globalization at the time.

Starting on May 15, 2015 the Rare Books and Manuscript Library at the University of Illinois at Urbana-Champaign will host a summer exhibition on fashion plates entitled Poplin & Paper: Four Centuries of Fashion in Print. This exhibition, curated by Anna Chen, will explore the intersection of print and fashion.

Find more information about this topic with the resources below.

Fashion to Die For: Did an Addiction to Fads Lead Marie Antoinette to the Guillotine?

Moeran, B. (2008). Economic and cultural production as structural paradox: the case of international fashion magazine publishing. International Review Of Sociology, 18(2), 267-281