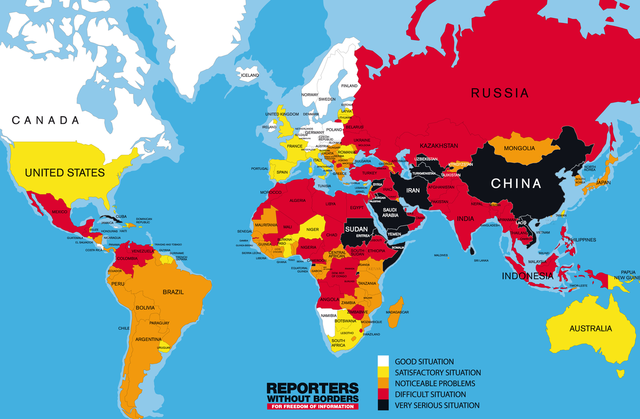 The Importance of Free Press

Saturday, May 3rd marks World Press Freedom Day 2014. This event, organized by UNESCO, presents a wonderful opportunity to reflect on the importance of free press and intellectual freedom, and the great impact that these issues have on creating a world with just and corruption-free governance.  The role of journalism is to bring issues of government, culture, science, environment, and society into the public light – to inform the people and hopefully to spark dialogues that include the diverse public into the process of shaping public policy.  A UNESCO press release explains that a free news media not only helps in policy shaping but also leads to the reduction of poverty through intellectual empowerment and increased mobility of groups that can be disproportionately affected by poverty, such as women and youth.

In order to provide this service, journalists and the news media need to be free to report the news truthfully. In many places around the world, journalists do not have this freedom.  UNESCO reports that journalists face obstacles including censorship, arrest, and even threats of physical harm and death.  It is the goal of organizations such as Reporters without Borders, Committee to Protect Journalists, the International Federation of Journalists, and many more, to protect the rights of journalists and raise awareness about the threats to press freedom that exist in the world.

Reporters Without Borders’ World Press Freedom Index 2014 ranks countries based on pluralism, media independence, environment and self-censorship, legislative framework, transparency,  and infrastructure.  The United States has fallen thirteen places on the list in the past year, currently residing in 46th place.  This change is largely due to the government’s efforts to increase security and track down whistleblowers and leaks. These actions by the government, according to Reporters Without Borders, inhibit journalists from revealing information to the public that may be in the interest of the public good.  Other countries have fallen on the list because of armed conflict. These countries include Lebanon and Iraq (due to the conflict in neighboring Syria), and Mali, the Central African Republic, and the Democratic Republic of Congo (due to the activities of guerrilla and terrorist groups in the region). In some cases, organized crime is a danger to journalists and has caused a decline in press freedom in certain countries, most notably Honduras, Guatemala, Brazil, and Paraguay.

Improving Press Freedom for the Future

Increasing press freedom is a major goal of the UN’s Post-2015 Development Goals.  Article 19 of the International Covenant on Civil and Political Rights states, “Everyone shall have the right to freedom of expression; this right shall include freedom to seek, receive and impart information and ideas of all kinds, regardless of frontiers, either orally, in writing or in print, in the form of art, or through any other media of his choice.”  The 1949 Geneva Conventions and the 1977 Protocols Additional 1 and 2 to the Geneva Conventions also include provisions for press freedom.  These international agreements create a powerful impetus for countries around the world to keep striving for greater press freedom and to keep assessing the ways that journalists and reporters are treated.

ARTICLE 19 is an international human rights organisation which defends and promotes freedom of expression and freedom of information all over the world.

The Ethical Journalism Initiative website is a new campaign to rekindle old values in media worldwide, launched by the International Federation of Journalists.

The International Freedom of Expression eXchange (IFEX) is a global network of around 90 non-governmental organisations that promotes and defends the right to freedom of expression.

The International News Safety Institute (INSI) is a coalition of news organisations, journalist support groups and individuals exclusively dedicated to the safety of news media staff working in dangerous environments.

International Press Institute is the global network of editors, media executives and leading journalists, dedicated to freedom of the press and improving the standards and practices of journalism.

UNESCO Freedom of Expression Toolkit – A Guide for Students

Books at the UIUC Library

Knightley, Phillip. (2004) The first casualty :the war correspondent as hero and myth-maker from the Crimea to Iraq Baltimore, Md. : Johns Hopkins University Press,