Learning Fusion 360 was a challenge and a half.

My class sat through a lesson last week where an Autodesk representative helped us with putting together a lamp, and while I did learn quite a lot at this, I got lost and ended up feeling a little discouraged. I went back through the lamp module online and cleared up what was confusing me at home that night, and from then on,  I feel great about Fusion.

I’ve learned to love the ‘edit form’ function, bending shapes in all sorts of different directions until some combination looks good. I’ve used this as I’ve started my semester long project: to make a fleet of spaceships, and a folder of spaceship parts (engines, canons, bridges, etc.). My goal is to create an interactive component for a science fiction series I’m working on through 3D printing. 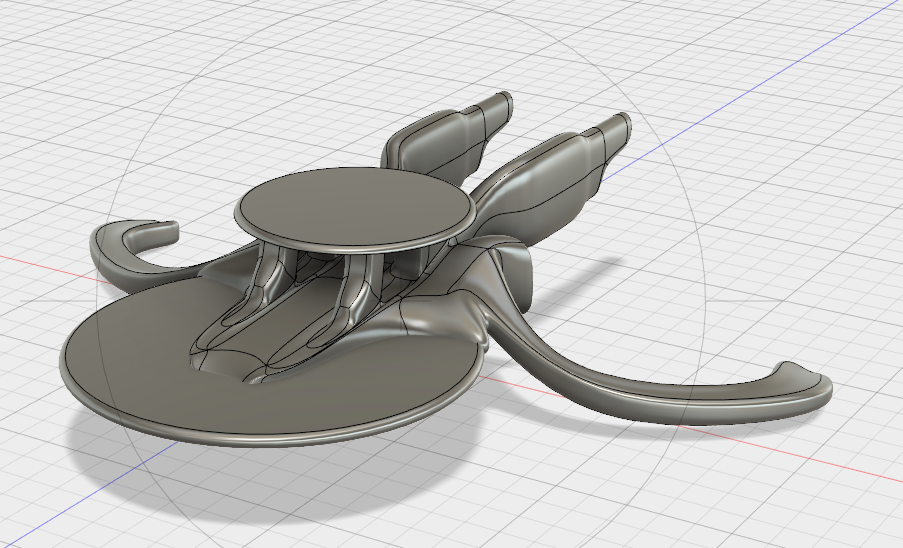 This ship isn’t quite done yet. The arms extending from either side could use some sort of structure on them. Additionally, I need to include a ‘spinning structure’ between the two main engines in the back. The saucers also need some details,

It’s important to me that my designs, and the tone behind my whole book for that matter, needs to be realistic. The spinning circle I intend to put back there will create a gravitational field for the area within it. It will allow people to walk with Earth-like conditions on the inner walls (a little disorienting to imagine, but check out the image below. It’s an artist rendering of a similar concept inside used on the show Babylon 5).

If I was a real engineer, I could design some gadgetry that would automatically turn the object, but for now I’ll settle for an axis of rotation I can build-in with the hole feature on tinkercad. From here on, I’m going to keep on designing ships that keep some of the same design features, and aggregating those consistent features into shapes that can be imported into tinkercad.