This course has gotten cooler and cooler every time we’ve met. This past week, we all worked together in a workshop led by Design for America to experience the design process. There’s nothing quite like the design process, because nothing else embraces the chaos of creation like it.

Our groups were presented with a problem: how can we stop distracted driving? Post it notes were all over the place, walls were covered with scribblings as everyone threw their thoughts around, and ideas were flowing constantly. We played games, which I think was absolutely crucial to the process because people began to have fun. When your mind is in that zone, it’s so easy to let ideas run wild and find one that actually works and build upon it.

I enjoyed the collaboration of it all. My group came from all walks of life and yet we still came together, put all of our experiences and knowledge in a pile, and brought ideas to life in the form of a pudgy little clay steering wheel. I love design because you know when you have an idea that you’re passionate about. We went through that process and I’d absolutely love if our product became a real thing. I’d use it. I think it’s an awesome solution.

The idea of the workshop was human centered design. It was studying an audience, taking all of our knowledge about that audience, and analyzing all of the factors to create something practical with the user in mind. I’m excited to see what comes next. I’m eager to see what problems my classmates encounter that they decide to apply this process to, and the solutions they come up with.

I absolutely love the collision of people we have in this course. So many people have come in from different backgrounds, we’re all mixed together, and told to create. There’s nothing cooler than that. While working with designers, it’s such a different environment because we’re all trained to think the same. I feel that that can be limiting to a degree and it’s interesting to me to collaborate with people who come from such a different story.

My group, the Dream Team- JKL, is a lot of fun to work with! It was interesting to even go back to working with Tinkercad. I honestly never played with it before as I had just jumped into programs such as Solidworks or Rhino. It thrills me that they’ve simplified the concept so much because that makes 3D modeling so much more of an approachable concept. Before anyone jumps into CAD, it’s sort of a daunting idea. There’s so much to it and people are creating such amazing things and in some programs even a cube seems impossible. Tinkercad eliminates a ton of that stress. I love Thingiverse because it just keeps expanding! Some stuff I found really cool:

The Sculpture Section Under the Art Category:

Some of the creations in this section absolutely blow my mind. People are rendering some truly incredible, ridiculously detailed things. I appreciate that level of skill because knowing how long something like that takes is amazing to me. Any sort of organic shape can be a challenge to make, and make realistic. This one especially because you truly can recognize the facial features. 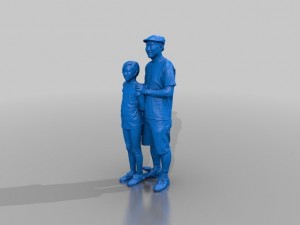 What even is that?! That would save me so much drawer space! Or be such a cool way to integrate into social gatherings. I think consolidating space is a certain art and why not use the walls to hold your fine dinnerware? I think this could be so practical in cafeteria situations or anywhere where large amounts of people are being served. The less room used to hold little things the more room for food! 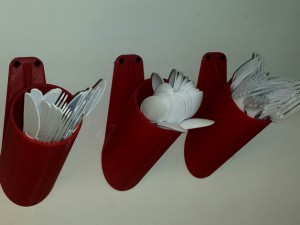 Personally, I value my Keurig on an emotional level. I have a coffee addiction and will be the first to admit it. As much as I love my Keurig, I kind of hate the stupid carousel they make to put the cups in. Again, it comes down to space efficiency. The carousel can only hold so many and it’s sort of obtrusive. Whereas integrating a stackable K-cup holder allows the user limitless possibilities for height and amount of cups held. I personally would create a K-cup column. 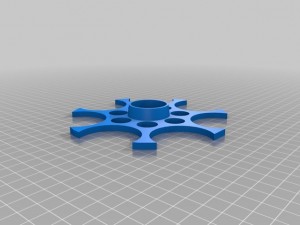 So it really isn’t a novel creation, but something as simple as creating your own dice indicates something so much larger for the future. Think, if we had a 3D printer in our home, we’d never have to worry about losing those stupid dice in your Yahtzee game. Or your favorite game piece in Monopoly. I love games, and I love toys, and I think that’s a great fix for losing small parts, but it’s indicative of creation on a much larger scale. When we can just wake up and print our breakfast, or even a pen. Something everyday that the user can create as needed. Where we’re at now with mass 3D printing leaves a lot of people just creating little nik-naks (sp?) but there’s so much potential with the actual creation of practical things. 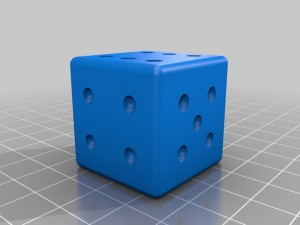