This week Digital Making started out with a sad event-our final session at the Fab Lab. I’ve learned so much there in the last few weeks and have had my eyes opened to tons of ne ideas for projects (as you can probably see from my ever growing Maker Movement Pinterest board) so I’m sad to see our time there coming to an end. I will definitely be back at some point on my own though! For our last rotation, my group was working with Aurduinos, something I knew about from my Intro to Electrical Engineering class, but that I haven’t really had a chance to mess around with on my own. We did a few basic activities, like programming the Aurduino to blink and then learning how to have it blink out and S.O.S. After that we got to use some of the sensors, which would allow us to add a bunch of cool stuff like light sensitivity or the ability to do something when the sensor senses a change in temperature or someone touches it to our projects. After that our instructor was helping people add specific things to their final projects, so I got started on a new project of my own, making a cardboard lamp out of a box I had just gotten a shipment of shoes in. I had seen this project on Instuctables a while back (here: http://www.instructables.com/id/Geometric-Cardboard-Lamp/), but cutting out all the pieces by hand seemed like a lot of hard work. Working with the laser cutter at the Fab Lab last time we were there, though, made me realize I might be able to make this lamp much more quickly-by using the laser cutter to do the cutting work for me! After checking with the Lab gurus if it was okay to cut cardboard, I got to work. Things went quite smoothly and after putting in a bit of work punching out the pieces and gluing, I had my very own cardboard lamp! 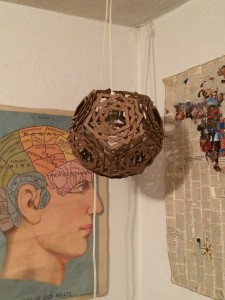 I got invited to dinner with the Fab Lab team (they were making pasta in the back room) and I still had some time to kill before it was done, so I started working on the screenprinting project I had started last week. In just about 15 minutes, I was able to successfully screenprint two more shirts with my logo in addition to the sweater I made last time. Lesson learned: screenprinting is pretty dang easy once you have the screen made! 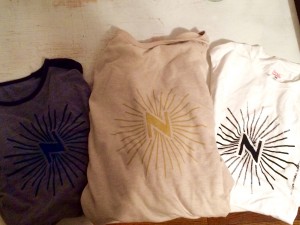 Overall, my last week at the Fab Lab, was pretty productive, but the Digital Making fun wasn’t over for the week. We still had our Friday field trip to the Deloitte Greenhouse to look forward to. The trip ended up being well worth the wait. Once in Chicago and done with our awesome meal at Roti, we headed over to the Deloitte offices, where we, along with some of the Making Things students, were shown around the client innovation center aka “The Greenhouse.” There we learned about some of the newest technologies that are changing modern industry, including

Augmented Reality, Data Visualization, and of course 3D printing! After a getting an introduction to each of these technologies from some Deliotters who worked at The Greenhouse, we had opportunity to work in teams to solve a mini-case regarding incorporating these technologies into Ameren’s business. This aspect of the tour really showed us how Deloitte goes about trying to bring new technologies into client projects and what we might expect to see if we were to work at Deloitte one day (a definite possibility for me). To end the day, we got to talk to a panel of current Deloitte analysts about their jobs and life at Deloitte, which was quite interesting as well. I learned even more about the company and am looking forward to applying for an internship with them again next year. Hopefully, it works out better than this year, where I got to the final round of interviews but did not get an offer.