For our second week at the Fablab, I was placed in the group that was working with the laser cutter. For this workshop, we used Inkscape to create a vector file with specifics that detailed what to cut through and what to only cut lightly. We printed out designs on wood and plastic leftover from some of the bigger jobs people had worked on. For my first few jobs, I ended up cutting out three mini globes on wood and plan to use them to make a necklace and earring set. 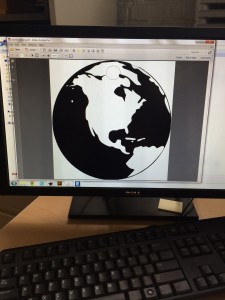 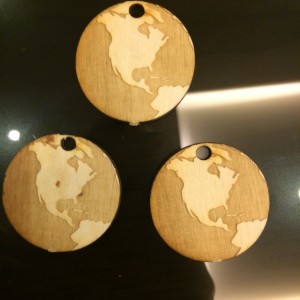 Next I cut my logo out onto wood. I also had the idea to print out a living hinge bracelet, which I tried on 1/8 inch wood and immediately had the bracelet break as soon as I tried to put it on. 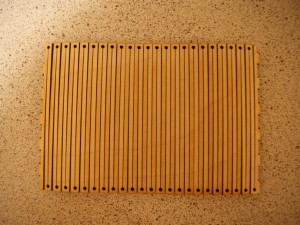 I figured it might be because the wood was too thick, so I tried a ¼ inch piece but I realized too late that the laser didn’t completely cut through it. L I went into the office to buy a new ¼ inch board since there were no scraps that would fit my design and started talking to one of the volunteers about what I was about to print. After a bit of discussion and showing her my broken first attempt, we came to the conclusion it was not actually the wood’s thickness that was the problem but the fact I was stretching the bracelet out too much when I put it on. I had to make the design longer to make it work! I tried a 7 inch long bracelet and it worked better but was still delicate, so I tried a 9 inch one but that was too big. By that time it was almost 8 o’clock so I decided to call it a night (I had homework to do still!), but I will definitely be coming back to figure out the just right version of this design.   Time really flies when you’re making!