When I first signed up for this class I thought it would focus only on 3D printing, but this past week we visited the Fab Lab in Urbana where my group got to work on tinkering with Arduinos. We were introduced to the Fab Lab staff; most of them were previous students and then Virginia and Colten led us through some basic code and set up for the first half hour of class.

The first thing we did was set up the board to make an LED light blink. I’ve never worked with anything electrical before so it was a really awesome experience to see that type of process and the code that makes it happen. We were given a breadboard, a light, an Arduino Uno board, and some wires. All that was needed was to plug in the wires to their respective ports and the LED light into the breadboard. Next, we added a light sensor where you could changes its sensitivity. The lower the sensitivity reading was the less likely it was to blink. In order to make it blink you would have to cover the light sensor with your palm, given that the sensitivity was low. After the light sensor, we began to work on putting a speaker into the board. It just needed to be plugged in correctly and it would start to beep. We were also able to change the sound level and tone. 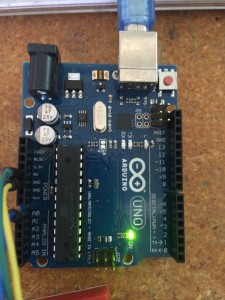 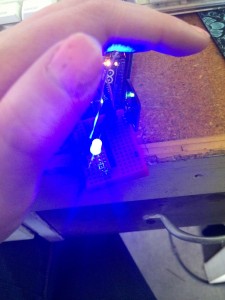 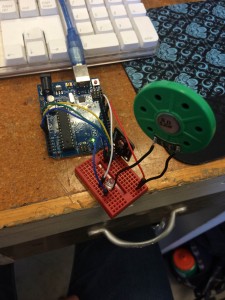 With about an hour and a half left of class, we continued to play around with Arduino and Virginia showed a few of us how to solder wires onto a magnet. The soldering station is pictured below: 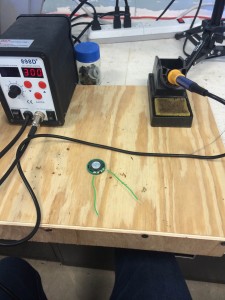 I learned a lot while at the Fab Lab and I’m really looking forward to what’s in store next week!