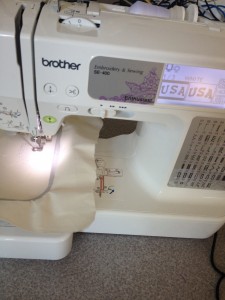 3D Printing except with textiles! Also I guess it’s technically 2D printing. Anyways, that’s what I worked with at my premier FabLab experience last week. A few of us had already messed around with Arduinos so we were moved to the sewing machine stations. We were explained that the machines were purchased late last year after they saw how they could be powerful making tools that could enable just about anyone no matter what sewing aptitude. Here are some of my biggest takeaways/observations: