With this project, I’m working towards a long term goal of mine: to publish a science fiction book and create a universe around it that can be influenced by fans. The book focuses on one vessel, which I’m in the process of building, and its search for other human life in the far-off future. Colonies lost touch with Earth (for reasons I won’t go into), but there are an untold number of colonies, and you know, a couple alien species too. 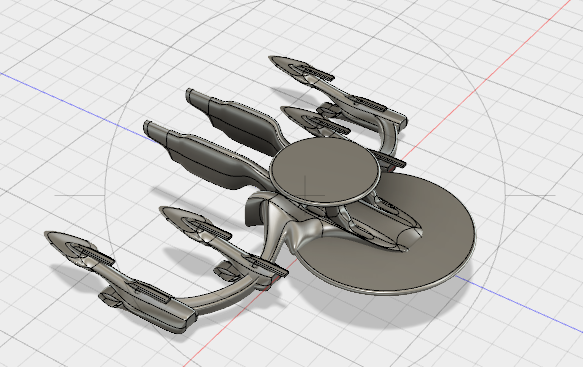 Anyway, even though the book only focuses on one human civilization and one particular style of ship, the lore behind this universe is really huge. That’s where the readers come in. In my head, users can post ship designs on a forum on the book’s website (linked to thingiverse). If the designs get popular enough, and enough users vote for it in a weekly poll, it gets assigned a civilization with a back story voted for by fans.

This project is going to be me developing the ships for the civilization my book focuses on and printing them. I will also be developing shapes that can be loaded into tinkercad (regarded as the easiest CAD software). These shapes and partial ships can be tinkered with, and people who don’t have the wherewithal to design with Fusion can design variant ship designs, which can also be absorbed into the lore. My goal is to make at least two ships, and design fighters/bombers/interceptors/ and a few frigates that attach to it. From there, I will retrace my footsteps and put the partial versions of my ship in a folder. Another folder will hold presets like turrets, engines, and support ships.