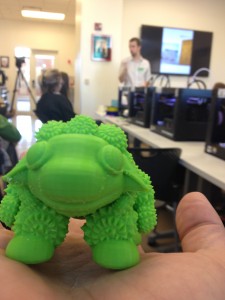 THIS WEEK ON #DIGITALMAKING SEMINAR (TV drama intro voice) we had a rep from the Champaign-Urbana Community FabLab come in to talk about the magical things they do over there.

We learned that the FabLab functions as a workshop for the community to do computer-focused innovation, design and fabrication. I had only a week or two ago learned that there were FabLabs across the country and the world that all did similar work. They aren’t everywhere obviously. Only places that are hubs of creativity and technology. So UIUC is probably a prime location. The idea behind the FabLab is to get people excited about DIY and fabrication. Their labs have 3D printers, scanners, engraving tools, a woodshop, small robotics and more. It was awesome to get a hands on feel for the all the objects made in the FabLab. The above picture shows a “broccoli sheep” that was 3D printed from a digital animal created in the game Spore. The creators of a lot of these items are young K-12 students from community. This is HUGE for getting kids excited about STEAM (the A is for art).

Best part of all? It’s not just for kids! College kids are allowed too (we’re just large children anyways). Though our introduction to the FabLab was done via powerpoint in the MakerLab at the BIF, I feel like I have a pretty good concept of what I’ll be seeing once we get to the workshop. I am particularly interested in working with engraving tools and Minecraft. From what I understand, I can build on Mindcraft and actually 3D print my creations. An example of that was passed around the class and I was in awe of how detailed the architecture was able to be for something made by blocks on Minecraft. Knowing myself though, I’ll likely find something else that catches my eye that I’ll want to try. This whole thing reminds me of going to the field museum as a kid.