The past two weeks we have been working with Travis, a researcher at the Beckman Center on learning how to use high-resolution 3D scanners.   The specific project my group used as an example was Arielle’s wheelchair racing glove. This was a great choice for showing the capabilities of what a 3d scanner could do. Her racing gloves were custom fit to her hand, and usually took hours to mold to fit perfectly, so it was awesome for her to copy them exactly using a scanner and print them out at the maker lab. Because of our visit, she now has a file of her favorite pair of racing gloves and can print them out again whenever she wants! 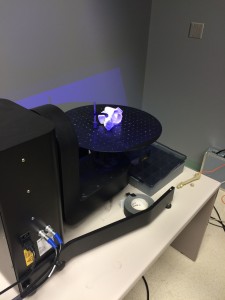 I had come to the class with something I wanted to scan as well, a rocky necklace I thought it would be really cool to try to scan and 3d print, since the geometry was pretty complicated and it would take a while to model if I wanted to start from scratch making it. This idea was not as successful as Arielle’s though. I knew printing out an exact copy of the necklace wouldn’t work because it would be too rigid for me to wear if I wanted to print it out again, but talking to Travis also made me realize using the platform scanner at Beckman would cause us to miss a whole side of the necklace-so that project was a no go. I might try scanning it in some way similar to the way we scanned our heads on the first day of class, by having someone hold the necklace in the air as I move around it and see how that turns out during one of our sessions in the next few weeks. 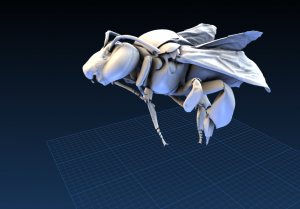 For week 7, we were back in the BIF maker lab again and Travis came in to teach us about cleaning up our 3d scans with a program called Geo-magic. Since I didn’t have any specific scan I made during my time at Beckman, Travis suggested I go on the Smithsonian X 3D site (here: http://3d.si.edu/), which had a bunch of 3D scans of things in the Smithsonian collections. I downloaded this huge 3D bee file (FYI: you don’t have to download the high resolution scans), which slowed down the computers in the lab a lot, but gave me a little taste of what Geomagic was all about. I’m definitely happy to have found a new resource for 3D files and looking forward to putting my new scanning skills to good use in the next few weeks