For the past two weeks we have focused on working with a program called Fusion 360 to model objects that we can then 3D print. 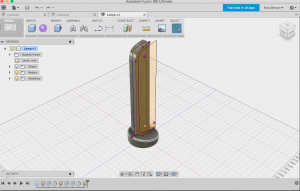 During our Week 5 session, we were lucky enough to have two gentlemen from Autodesk come in and help us learn how to use the software. After spending a bit of time discussing what it is like to work as a industrial designer in industry, we started working Fusion 360 lamp modeling tutorial. Fusion is quite an interesting modeling program because it integrates the whole product development process-from design, to engineering, to fabrication-into one cloud-based tool. It’s a pretty new product (first launched ~2 years ago when I was a course aide with the GE 101 class) and is a really good software to use for creating non-linear geometries and to working on modeling projects with teams. Even though it was developed by the same people, it’s quite a bit different than Inventor and involves what is called “direct modeling”-pushing and pulling on the model to create details and form shapes- instead of the traditional parametric feature based modeling approach. This workflow took a bit of getting used to, since I was pretty comfortable with the Inventor way of doing things, but was definitely helpful to learn more about, because Fusion 360 allows users to create certain geometries that would be difficult, if not impossible to create in Inventor in a matter of minutes. 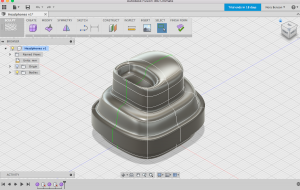 A great case in point is the set of headphones I worked on modeling over the course of the week after our introduction to Fusion 360 with the Autodesk guys. The ear pieces in particular, which involved a lot of more rounded geometries took me only about 15 minutes to create in 360 (and this was me using Fusion for pretty much the first time, it probably would have taken a whole lot less time if I had been more familiar with the program,) where in Inventor getting something that complex could easily have taken a few hours or more. 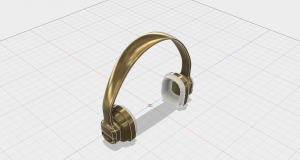 During class the 6th week, we worked on finishing up the tutorials we had done over the course of the week and had a chance to get a free print of something we had worked on. I completed my headphones, but decided to instead print out this open-sourced shelled torus lamp by Massachusetts-based Design Studio Nervous System. I also came back later in the week and printed a few more things, including a 3D bracelet from the Nervous System bracelet generator, another version of my head with a larger keyring hole on top (it worked a lot better the second time around!), a iPhone speaker amplifier (I forgot to use, so this didn’t turn out perfect, but it still functional), and an iPhone case from the MakerBot generator (sadly it turned out a tiny bit too small so I’m going to have to try that one again). The last couple weeks have left me feeling a lot more comfortable using the MakerBots in the BIF lab and I’m looking forward to expanding my capabilities with our upcoming classes at the Beckman scanning facilitates and at the Fab Lab in Urbana. 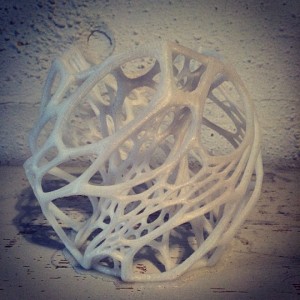 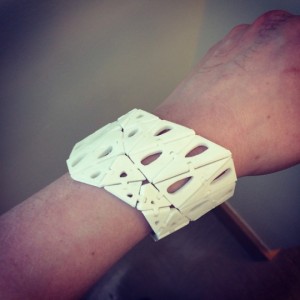