So evidently I’m not very good at remembering to write reflections (setting a weekly iPhone reminder now), but class is going great and I feel like I am finally getting the hang of 3D design software. Two weeks ago when we had the in class Fusion 360 tutorial I kind of felt like repeatedly banging my head against the wall. The presenters were great! But I don’t know if I was just having a really “off” day or what, but I could not master a single one of the steps they were trying to teach us. My lamp was never going to be a lamp- so I eventually gave up and settled for messing around in Sculpt mode making pretty blobs.

But low and behold, after much fiddling and tinkering- I made something! From scratch! By myself! 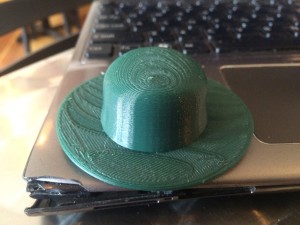 It’s a hat! haha I just vaguely followed a Youtube tutorial and sculpted some cylinders, but I think I’m starting to grasp how this whole “design process” actually works. I wasn’t too fond of Fusion originally- but the sense of accomplishment I had after finally printing something that was my own, was pretty awesome.

Here’s another thingy I made the past two weeks that I forgot to write about. 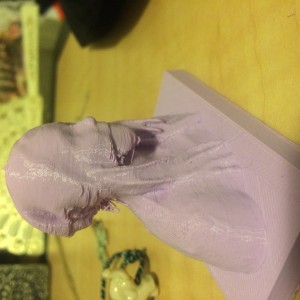 It’s me! Turned sideways- I’ll figure out how to rotate images in my next post.

I’m really excited to design more things and just explore the world of 3D printing more. I find myself wandering onto Tinkercad when I have a spare moment in class or to procrastinate on hw. Can’t wait to play around with scanners in next week’s class as well.