I don’t really remember how many times I have thought of a solution to a problem I believe the world is encountering only to immediately knock it down myself, thinking that it was either absurd, unreal or that someone else had probably thought of that idea before only for it to prove unfeasible. After Week Three’s session, I don’t think I will ever knock down an idea again. The IDEO design consulting company video was enlightening and taught me why sometimes even the most unrealistic ideas can be the best ones. With a little more thought, I realized that seventy years ago, the concept of the internet would have been thought of as crazy, only for it to be as commonplace as a glass of water right now. Hell, in a lot of European restaurants, WiFi is free, water is not!

Our group working on finding solutions to the problem of texting and driving came up with a fairly common (two other groups came up with the same idea) solution – project all the info you need to find from your phone (while driving) onto your car’s windshield without obstructing the view of the road and make all commands through speech. One common thought that kept popping up in my head was that this idea is probably light years away from coming into mainstream commercial cars. I couldn’t have been more wrong. Google glass uses the same technology on a much smaller surface and Siri is amazing at taking voice commands, combine the two and our idea is already feasible!

Design for America’s brightest aspect is the structure it brings to coming up with a solution, a structure that I believe is crucial to unlocking the potential of Additive Manufacturing on a personal basis. Soon we may have steering wheels that aren’t even remotely circular and mobile phones that are, prosthetics that fit and look better than the real bio versions they’re replacing and pens that can draw objects instead of images. I’m excited for the future, and thankful to Design for America to opening up my mind. 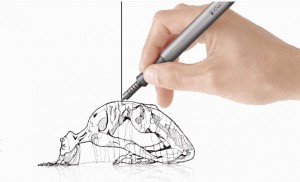