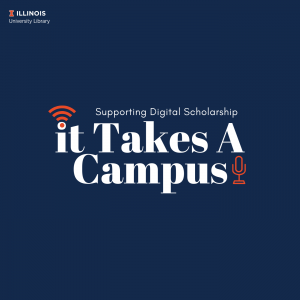 END_OF_DOCUMENT_TOKEN_TO_BE_REPLACED

Although the push for open access is decades old at this point, it remains one of the most important initiatives in the world of scholarly communication and publishing. Free of barriers like the continuously rising costs of subscription-based serials, open access publishing allows researchers to explore, learn, build upon, and create new knowledge without inhibition. As Peter Suber says, “[Open access] benefits literally everyone, for the same reasons that research itself benefits literally everyone.” 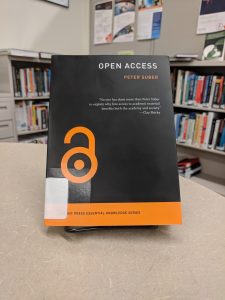 Suber introduces his book Open Access (a part of the MIT Press Essential Knowledge Series) by writing, “I want busy people to read this book. […] My honest belief from experience in the trenches is that the largest obstacle to OA is misunderstanding. The largest cause of misunderstanding is the lack of familiarity, and the largest cause of unfamiliarity is preoccupation. Everyone is busy.”

What follows is an informative yet concise read on the broad field of open access. Suber goes into the motivation for open access, the obstacles preventing it, and what the future may hold. In clear language, Suber breaks down jargon and explains how open access navigates complex issues concerning copyright and payment. This is a great introductory read to an issue so prominent in academia. 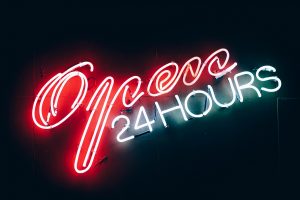 Take the time to fit Open Access into your busy schedule. You can read it the Scholarly Commons during our regular hours or online through our catalog anytime.

And finally, if you have any questions about open access, feel free to reach out to or request a consultation with the library’s Scholarly Communication and Publishing unit! 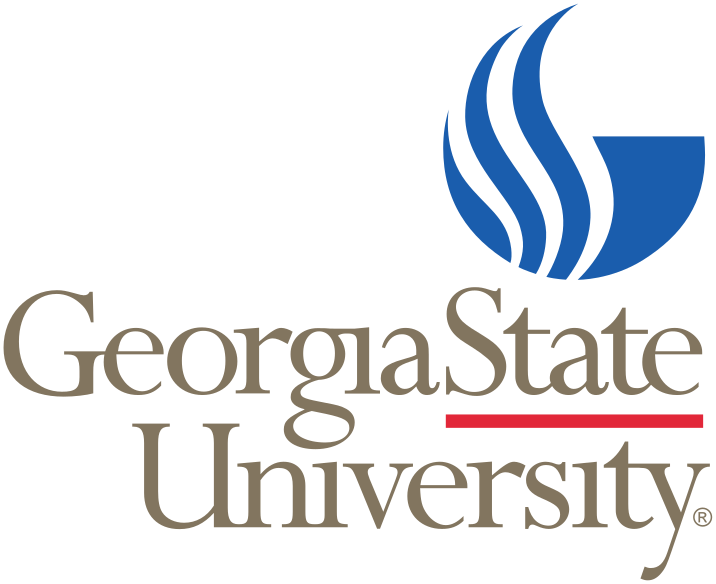 Many people use Evernote to keep their research (and life) organized. This notebook-based note-taking platform has grown in popularity so much, that the creators of Evernote created Postach.io, a blogging platform that connects with Evernote, and uses Evernote notes as the content of blog posts. Basically, you can take the notes you’ve created in Evernote and directly publish them for anyone to see!

If you’re someone who is already familiar with, and using Evernote, Postach.io may be a great, free platform for you to get your research out there. While it doesn’t have the same kind of customization options that you can have on WordPress or Tumblr, nor the built-in audiences of those sites, its simplified style and integration with Evernote makes it a useful tool, especially since Postach.io is free, and only requires that you have/create an Evernote account.

To start, you must link up your Evernote account with Postach.io. After submitting your contact information, the site will automatically transfer you to Evernote. 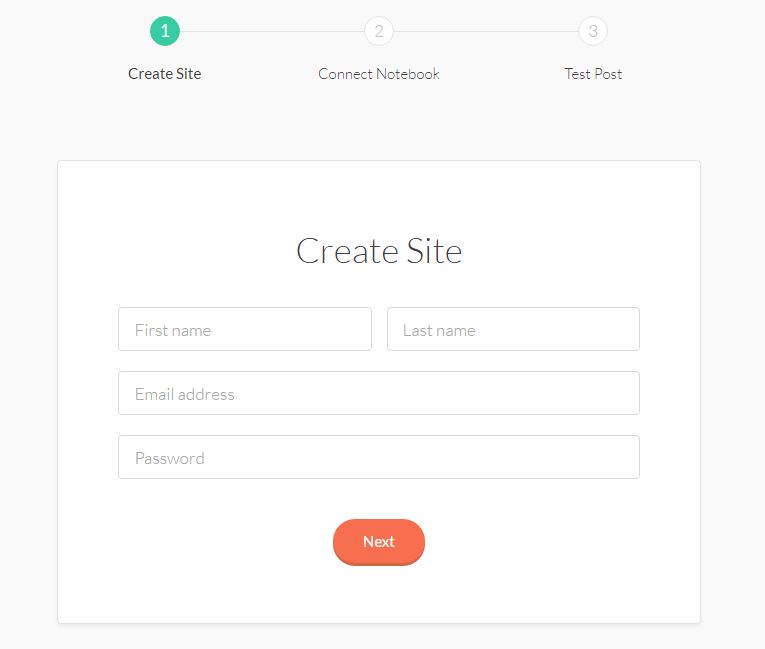 The first step to creating a Postach.io site is to give your name, email address, and password. 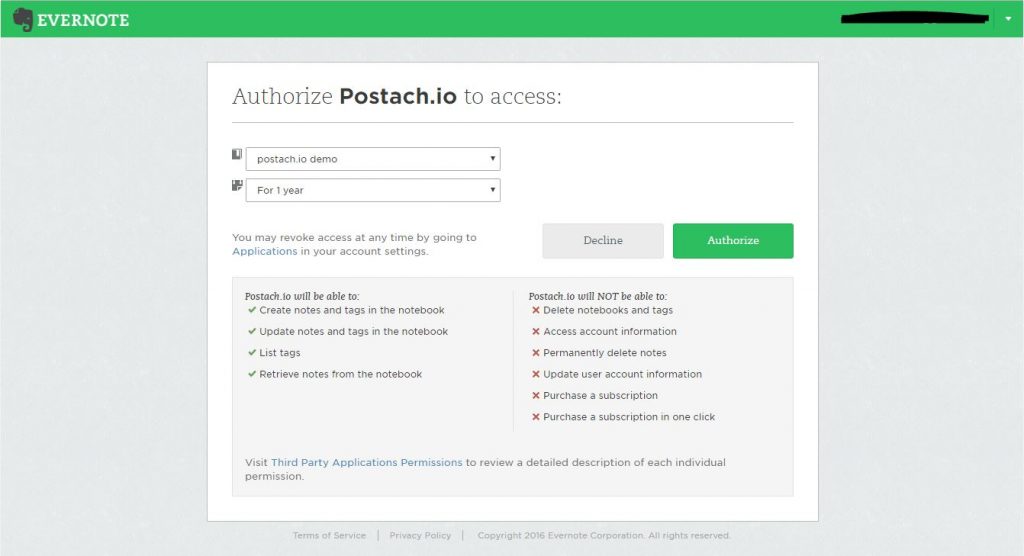 The Evernote page that Postach.io links you to.

Evernote will then ask whether you’d like to create a new notebook for your Postach.io site, or link to a notebook already in use. Note that linking to an already-created notebook does not automatically make your notes public. Each note on the site must have a ‘published’ tag attached to it to in order to be public. I’ll have more on that in a little bit.

After you authorize your account, you will have the opportunity to create an Evernote note that will serve as your initial Postach.io post. The most important part of this process is tagging the post as “Published.” A note that lacks this tag will not be put on your Postach.io site, even if it’s in your authorized notebook.

Me adding my “published” tag to ensure that my post is added to my Postach.io site.

As far as the site itself, your options are somewhat limited. This is what your site will look like immediately after you publish your first post: 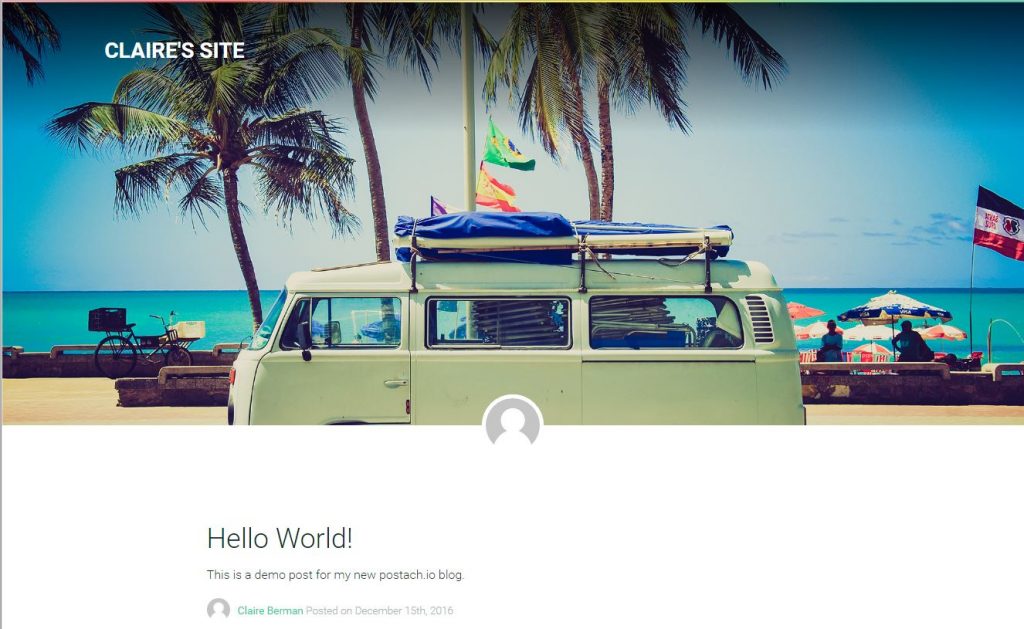 You do have the option to change your avatar and background image, as well as choose from a little over a dozen themes to work with. These themes, however, are all incredibly basic, with few customization options outside of the basic appearance. In order to access the source code for your site or to create a custom theme, you will need to upgrade your account to a paid account.

A paid account will let you access that source code, as stated above, as well as create multiple sites. With a free account, you can only have one site at a time. $5/month gets you five sites, $15/month will get you twenty sites, and $25/month will give you fifty. If you pay for an entire year in advance, you’ll get two months out of the year free. In my opinion, you’re better off using a free platform like Tumblr or WordPress and transferring your Evernote data than opting for a paid account.

Overall, Postach.io is a simple way to get work that you’ve already started in Evernote published and readable by the world.

Do you think you’ll use Postach.io? What blogging platforms do you use? Let us know in the comments, or Tweet us at @scholcommons!