Application Programming Interfaces, or APIs, are a major feature of the web today. Almost every major website has one, including Google Maps, Facebook, Twitter, Spotify, Wikipedia, and Netflix. If you Google the name of your favorite website and API, chances are you will find an API for it.

Last week, another institution joined the millions of public APIs available today: The Art Institute of Chicago. While they are not the first museum to release a public API, their blog article announcing the release of the API states that it holds the largest amount of data released to the public through an API from a museum. It is also the first museum API to hold all of their public data in one location, including data about their art collection, every exhibition ever held by the Institute since 1879, blog articles, full publication texts, and more than 1,000 gift shop products.

But what exactly is an API, and why should we be excited that we can now interact with the Art Institute of Chicago in this way? An API is basically a particular way to interact with a software application, usually a website. Normally when you visit a website in a browser, such as wikipedia.org, the browser requests an HTML document in order to render the images, fonts, text, and many other bits of data related to the appearance of the web page. This is a useful way to interact as a human consuming information, but if you wanted to perform some sort of data analysis on the data it would be much more difficult to do it this way. For example, if you wanted to answer even a simple question like “Which US president has the longest Wikipedia article?” it would be time consuming to do it the traditional way of viewing webpages.

Instead, an API allows you or other programs to request just the data from a web server. Using a programming language, you could use the Wikipedia API to request the text of each US President’s Wikipedia page and then simply calculate which text is the longest. API responses usually come in the form of data objects with various attributes. The format of these objects vary between websites. 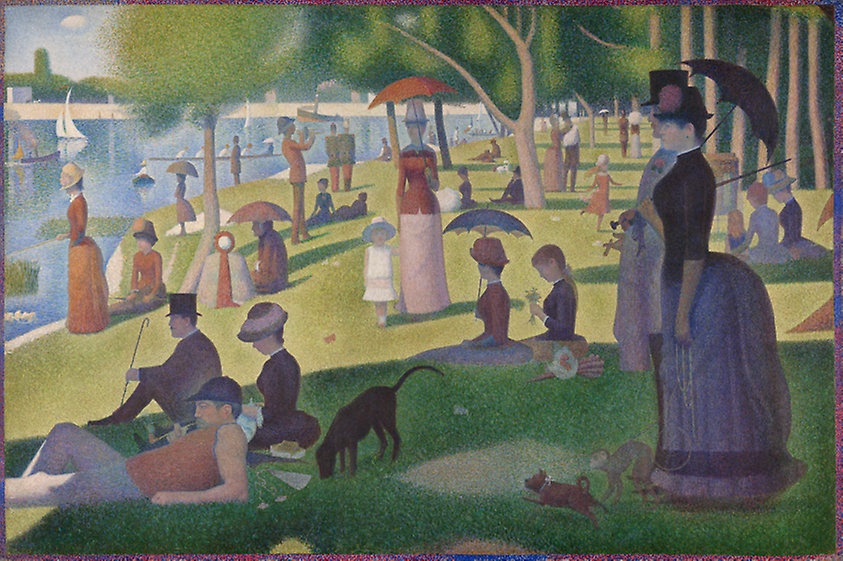 “A Sunday on La Grande Jatte” by Georges Seurat, the data for which is now publicly available from the Art Institute of Chicago’s API.

The same is now true for the vast collections of the Art Institute of Chicago. As a human user you can view the web page for the work “A Sunday on La Grande Jatte” by Georges Seurat at this URL:

If you wanted to get the data for this work through an API to do data analysis though, you could make an API request at this URL:

Notice how both URLs contain “27992”, which is the unique ID for that artwork.

If you open that link in a browser, you will get a bunch of formatted text (if you’re interested, it’s formatted as JSON, a format that is designed to be manipulated by a programming language). If you were to request this data in a program, you could then perform all sorts of analysis on it.

To get an idea of what’s possible with an art museum API, check out this FiveThirtyEight article about the collections of New York’s Metropolitan Museum of Art, which includes charts of which countries are most represented at the Met and which artistic mediums are most popular.

It is possible now to ask the same questions about the Art Institute of Chicago’s collections, along with many others, such as “what is the average size of an impressionist painting?” or “which years was surrealist art most popular?” The possibilities are endless.