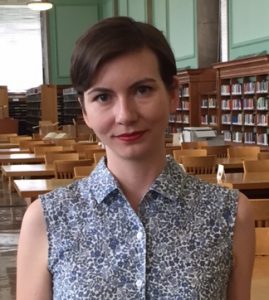 This latest installment of our series of interviews with Scholarly Commons experts and affiliates features Helenmary Sheridan, the Repository Services Coordinator at the University of Illinois at Urbana-Champaign Library. Helenmary manages the Illinois Digital Environment for Access to Learning and Scholarship (IDEALS), a digital archive of scholarship produced by researchers, students, and staff at Illinois. She also conducts outreach with scholars interested in using Illinois’ other public repository, the Illinois Data Bank.

What is your background and work experience?

I graduated with a Master’s Degree in Library and Information Science from the iSchool at Illinois in 2015. I earned my degree through the LEEP program and worked at Northwestern University as a metadata and digital curation assistant while I was in school, which was a wonderful experience. Before that, I worked in visual resources, primarily with the digital collections at Northwestern and prior to that at the University of Chicago where I did my undergrad. At U Chicago, I majored in art history and took significant coursework in geophysics, which was originally my major.

I came into this role primarily from a strong interest in metadata. I was creating metadata for digital objects at Northwestern. I had been working with an art historian, and the role developed into project management, working with software developers to build a repository. So I got into working with software developers, and my interest in metadata led me to being a sort of translator between librarians and developers. This led to my being interested in technical infrastructure, without being a programmer myself. But I do have some programming experience, which allows me to communicate more easily about what I’m doing.

I’m also interested in interfaces and how designers of technical systems conceptualize our users and how, through technology, it’s really easy to abuse users.

I think that a lot of people don’t look outside of their disciplines, which makes a lot of sense. As a researcher, you develop your most efficient ways to find information. But as a student, it can be really productive to go to sources outside of your own discipline. When I was an art history major as an undergrad, I wrote my thesis on scientific illustration and scientific representation through art. Can you trust an artist who has no scientific knowledge to represent what they see? I was consulting lots of scientific work and lots of technology studies stuff, as well as lots of art image databases.

The way these resources are organized is totally different. It broadened my horizons to see what a wealth of resources is out there. Stuff that isn’t necessarily in the libguide for art history, or science and technology studies.

That’s another satisfying part of my work. A diversity of stuff comes into IDEALS, so when I can’t help a patron directly, I can help them find a related resource that might be useful to them.

If you could recommend one book to beginning researchers in your field, what would you recommend?

Something I was thinking about the other day is Clifford Lynch’s 2003-2004 papers and talks on institutional repositories, about how they are going to help solve the crisis of scholarly communication. He suggested that they would become tools to provide researchers with alternative sources for dissemination of their work, or even a platform for new forms of scholarly communication, and he imagines this future where there’s a robust system of interconnected repositories that can all communicate with one another.

For instance, you’ll have family members who are looking up their great aunt’s thesis to have something to remember her by. This problem falls outside the traditional scope of academia, but institutional repositories prove very beneficial for people in these sorts of ways. This helps me think about digital libraries in general. We’re not just trying to solve a problem, but to help people. We should be user focused, rather than problem focused.