Google’s much lamented decision to pull the plug on Google Reader has produced more than petitions from frustrated users. A number of competing services have stepped into the limelight and are touting their viability as replacements. In this post, we offer a look at some of the top contenders: 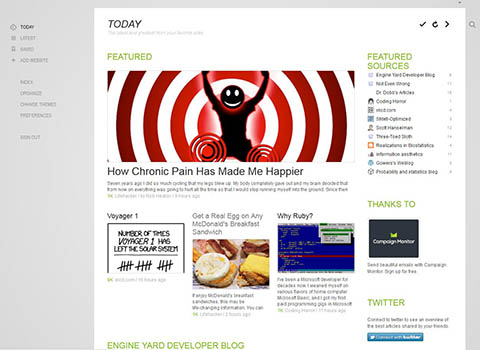 Feedly is a reader with a clean, newspaper-like layout that blurs the experience of using a RSS feed reader, with that of reading a news site. Like many RSS readers, Feedly used Google Reader’s API to provide code for synchronizing its feeds, but Feedly is using its resources to develop a custom syncing engine and, in doing so, is aggressively vying for its share of Google Reader’s market.

The Old Reader is a new RSS reader that began development after Google Reader began to integrate its sharing functions with Google+. The service is still in Beta and reviews from the Web are that it’s a worthy successor. Importing your Google Reader feeds is currently supported, but since the announcement that Google Reader was shutting down hit the web, their servers have been congested and users have reported waits of up to a week before have their Google Reader feeds are fully integrated.

NetVibes is a service that provides a personalized dashboard from which to observe multiple aspects of the Web, including RSS feeds, news, weather, and Social Network accounts through a customizable dashboard. NetVibes’ target users are businesses and organizations with the goal of building and monitoring online brand notoriety, but it’s easy to understand how such a dashboarding service could be useful to individuals.

Another popular web-based option is NewsBlur, but, due apparently to heavy traffic, it has stopped offering free accounts. It was designed as a news reader, but works for blogs and other types of web resources as well. Besides the cloud-based options mentioned so far, desktop applications exist also for Mac and Windows. The most popular Windows option, FeedDemon, will be retired with Google Reader (on which it is dependent), but other options are available including Microsoft Outlook itself. The premier RSS reader for Mac, Reeder, will continue to be available for $5 from the Mac App Store.

If you have questions about software use in research and teaching, email us at sc@library.illinois.edu or stop in at the Scholarly Commons from 1 to 5, Monday, Wednesday, and Friday, and 10 to 5 on Tuesdays and Thursdays.